Hello everybody, and welcome to my first strategy article dedicated entirely to Arena! Since developing the BTL Arena Tier List months ago, it's no secret that this site has been focusing on constructed TES: Legends. However, many people have asked me for more insight into Arena and, after continuing to update the tier list and accruing over thirty aced Versus Arenas, I decided now would be a good time to offer some more in-depth tips since I feel as though I've developed a solid grasp on the format. In this article, we'll be diving into the draft portion of Versus Arena!

A follow-up article will be posted in the coming days on tips for playing the Versus Arena format itself. Both articles are focusing primarily on Versus Arena since it appears to be a more popular format and is the Arena format I focus on when I’m not playing constructed. While there are some differences in how to play optimally from Versus Arena to ladder, this article on the draft portion will be more lengthy as the draft is the single biggest difference between the two formats.

Without further ado, let’s get into the meat of the topic!

I originally considered titling the article “Drafting for Value vs. Drafting for Synergy,” but felt it was more appropriate to discuss these things in the context of my overall draft strategy. “Value, Curve, Synergy” refers to, in order, the three things I think about when presented with any given pick in the draft. Whether I’m on pick one or pick thirty (or any in between), I at least give a nod to each of these three factors. The order is particularly relevant, and I’ll discuss that further as I go deeper into what each of these really mean.

Value is a term that most card game players are familiar with, yet often find hard to define. In truth, it can mean something different for two different cards so it’s hard to place a single definition on the word. One thing that remains true, though, is that we’re always talking about value relative to the Magicka cost of the card in question. Miraak, Dragonborn has one of the most powerful effects in the game, and Redoran Enforcer is a mere 2/3 for two. Does that mean Redoran Enforcer is inherently less valuable than Miraak? The answer is most likely no, because what we value in a two-cost creature should be much different than what we value in an eleven-cost one.

In some creatures, the stat-line is what holds value. This is exemplified by Young Mammoth, a simple 3-cost 4/4 with Breakthrough. In some, it’s a powerful effect, such as Triumphant Jarl or Ungolim the Listener. “Narrow” cards, or cards which are more likely to not have a relevant effect, are typically valued much lower. Some of these are dependent on synergy which we’ll discuss in a bit.

Keeping narrowness in mind, creatures are inherently more valuable than actions, which in turn are more valuable than items. Creatures always offer some value on board through their stats (even if they aren’t fantastic for the cost) whereas actions do not. They have to make up for this in power level. It’s even more difficult to find items you want to take over a good creature, since not only do they not benefit your board from a clear board state just like actions, but they also require you to have a creatures on board to have an effect in the first place. That said, there are definitely many items worth taking due to their power level (like Heirloom Greatsword) or utility effects (like Daedric Dagger and Snake Tooth Necklace).

As I mentioned, the Between The Lanes Arena Tier List is a good starting point when assessing the value of cards you may not have played before. Cards are ranked purely on value for their cost based on my experiences with them in the multitude of Arenas I’ve played.

The second most important thing when looking at a choice in the draft is your Magicka curve. There’s a reason they show you this on screen.

Typically, decks will have an average Midrange curve in Versus Arena, with a decent amount of two-Magicka cards (possibly coupled with some possible one-cost cards) for the early game, and a curve that goes down slightly as it gets higher. Decks frequently have two or three cards that cost seven or more, with a solid amount of threes and fours to ensure the first few turns of the game aren’t without plays.

There are no hard rules for the curve, though as a general rule of thumb, I like to make sure I have at least six two-Magicka creatures to play on curve (on turn two or turn one with the Elixir of Magicka) in my decks. Most have seven or eight, and this can also depend on the number of one-Magica cards I draft (which usually doesn’t exceed three and can frequently be one or zero). Even with the two-lane system in place, not having a play for the first two turns against an opponent who Elixirs into a two drop on turn one into another two or three-cost card on turn two can occasionally spell defeat by itself and force you to rely on a Prophecy. Beyond that, I do like to make sure I have a bit of late game for turns seven and higher given that I’m drafting an average Midrange strategy.

There are some exceptions, and it’s important to know the strengths of the class you’re in. You can’t really go wrong with these guidelines, but in decks using Strength (red), for example, many of your cards will have higher value the more aggressive your deck and play is. Therefore, the curve is usually tilted towards the early game more in classes like Battlemage and Crusader. On the flip side, having Magicka ramp or effective tools to stall the game out like Guards and Drains can make taking on a heftier curve much more reasonable.

Curve is usually the second thing I think about because while it’s vital to have plays throughout the game, I don’t obsess about my curve looking a certain way, especially early in the draft. If I already have two four-cost cards but only one two-cost card three picks into the draft, and I’m offered a Preserver of the Root and a Siege Catapult, I’m taking the Preserver every time. The difference in value is too extreme, and curves can be fixed later in the draft – low value cards cannot be. 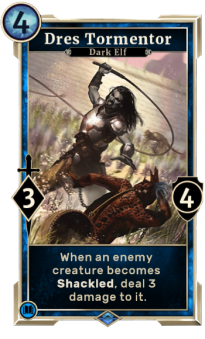 maximum amount of the time. I like creatures that are good on a clear board or trade very well, and effects that are good in a variety of situations. Drafting a Dres Tormentor because “I may pick up some Shackle effects later” is not very appealing to me. However, there are definitely times to take little synergies like that into account.

In the example of Dres Tormentor, if I’m about halfway through my draft and have already picked up two copies of Shrieking Harpy and a Mace of Encumbrance, I would be much more likely to take the Tormentor. It might not be the highest value on the surface when we look at our choices, and we should still then look at our Magicka curve and make sure nothing egregious (like zero two-cost cards up to that point) needs to be fixed, but Dres Tormentor becomes downright good at that point when we look at the existing synergies in our deck.

This is much different than taking a card reliant on synergy early in the draft in  hopes of it paying off. Those types of investments are often just too risky. For example, I’d never first-pick a Goblin Skulk against a much higher face value two-drop like Bruma Profiteer. Sure, in some decks, the Skulk may be better, but we have no control over the cards we’ll see in the future. Even if we did, it’s unlikely we can make the Skulk consistently as good as the Bruma would be. Often, a pick like this can lead to trying to rationalize it later in the draft by picking a “fixer” card. A first pick Skulk could convince someone to pick a Curse later over a high-value rare like Dune Smuggler or Cliff Racer. It’s much safer to go into the direction of the value and the curve than play for this. Now, if we already had a Curse in the deck along with an Elusive Schemer or two, that Goblin Skulk becomes a lot more appealing.

It’s worth noting that the one exception to this rule that I’ve found in my drafts so far is the Orc theme in Warrior. Investing in Orc synergy early by picking just about every Orc-themed card you see when drafting in the Warrior class can pay off due to the high density of Orcs currently. This is actually my preferred way to draft this one class due to that, and the different directions that the “value” picks will pull you if you draft for value alone – the Strength cards pull you into aggression and the value Endurance cards pull you into a higher curve.

Now that we’ve gone over my general road map through draft picks, let’s discuss just a few things to avoid.

To illustrate the points I’ve made in this article, I’ll be attaching a video below of a sample draft where I’ll discuss each pick in-depth and how they all relate to the topics I’ve covered here.

Hopefully you all have enjoyed this article, and I wish you the best of luck in Versus Arena; it’s truly a rewarding format when you get the handle of it, and I personally find it quite fun. There is variance of course, and nothing can guarantee you a perfect run, but I guarantee that with practice and solid analysis of your draft and play, you will be at a distinct advantage. Until next time, good luck in your drafts!

2 Comments on CVH’s Guide to Mastering Arena: The Draft