Blackjack is an endurance game meant to either grind away your stack or slowly reward a player over a long period of time, something I find akin to the legend grind found in many popular online CCGs (including TES:L). 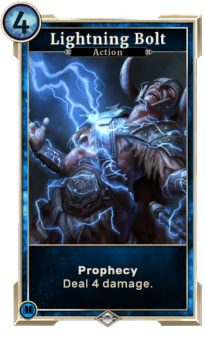 work. Being dealt a 16 is typically playing from a losing situation. Hitting a 16 seems asinine to the blackjack noobie because there is just a 25% chance to improve the hand and not bust. They’d rather cling onto their bad hand and “stay in the game.”

How does this tie into TES:L? There are some games you are playing from behind. The object is to find a path to victory. If you are piloting an Aggro deck against Control, you are in a bad shape once your hand is depleted and they start to stabilize. Inexperienced players will trade down creatures and try to stay alive while losing sight of what they are trying to do, which is reducing the opponent’s health to zero. Don’t be afraid to push face in these situations, set up a win off drawing into a Tazkad or hitting a Lightning Bolt off of Prophecy. Losing slowly will not increase your win rate, but finding even a 3% chance to win will!

2.) Not Surrendering the Bad Hand

Some casinos (including the one I deal at), offer the option to surrender your hand for the price of half your bet. No one likes to lose, and most players are likely to never give up a hand. Not surrendering is seen as a badge of honor and players pride themselves on “trying” to win at all costs. At these establishments, the better play is to surrender your 16 rather than take the hit.

Didn’t I just tell you to play to your outs? YES! Play to all of your outs; however, there are some points in a game where the game is unwinnable. Once a game is decided, don’t waste time playing out an extra one, two, or more turns just to “give it your all;” accept defeat, hit the concede button and move on. That time is better spent queueing into another game that you can win. Winning on the ladder is important, but using your time efficiently on the ladder is of equal (or arguably greater) importance. Conceding at the proper time can allow a player to squeeze an extra 2 or 3 games (and possibly wins) into a play session.

money as you can on your bet while you have the best of it. People sometimes get intimidated when they have a big bet down on the table about “risking more money.” Doubling for less is worse than just hitting (because you can only draw 1 card and limit your options), but also worse than doubling for the full amount because you aren’t getting the good return for playing at a SLIGHT disadvantage while in a strong position.

My TES:L double down equivalent is all about pushing your advantage. While its true you shouldn’t overextend into Ice Storms, or over-commit to a lane in the late game against a possible Red Bramman or Mantikora, its also important to seize the moment. Forcing your opponent to answer the threats you have compounded throughout the game can close games out and deny your opponents the outs that they may be looking for with rule number one. The goal is to play loose without playing badly. The double down is the quintessential good play that builds upon your advantage.

I hear things along the lines of “I’ve never seen anyone as lucky as this dealer” or “I should have been paid off on x hand” multiple times per night. Players have a tendency to blame anyone and/or anything else for their bad beats, bad plays, and mistakes.

Card games in general have a level of variance; whether we are talking about a cold blackjack shoe, or a “lucky game changing prophecy” we, as players, cannot control everything that happens. The goal should always be to make the best possible play with the information that we are given. If we play the best game possible, we reduce the amount of times were we give up our fates to the cards. Accepting RNG, luck, and variance also allows a player to move on after a bad beat while keeping a clear head as they start their next hand or game.

5.) Raising your Bet when Losing

Players losing several hands in a row (and a lot of money in the process) have a tendancy to start raising their bets and chasing their lost money. Blackjack is a game where you need to protect your money while you are at a disadvantage and raise your bet when in a winning position. A player raising their bet to chase their money is the fastest way they can go for broke.

Alternatively, in TES:L, players tend to marry a deck, or flip flop between decks on a whim while climbing the ladder. Some players will stay with the same deck an entire season, and weather bad storms when their deck is under-performing to a changing meta, hoping their win rate will rebound itself if they play enough games. Other players never give a deck the chance to succeed by switching off of it at the first sign of trouble. A good winning strategy is to have a handful of “go to” decks. After something has proven to be ineffective, finding another option is often a good strategy. (Note: losing one or two games is usually not enough to gauge the effectiveness of a deck)

Hopefully, you can take the mistakes and misplays I see on a nightly basis that generate advantages for the casinos and use them in your favor to create an advantage against your opponents. Unlike blackjack, you don’t have to pay for lessons.

Hello! I'm CardCounterChris, a Navy vet and a lifelong card enthusiast. A blackjack dealer by trade, moonlighting as a streamer, I've had a life long love for ccgs and have played MTG since I was a kid. I've also played Hearthstone, Eternal, and now I stream a lot of Elder Scrolls: Legends! I'm also starting to branch out into Slay the Spire. This love for card games has even influenced my career, as a blackjack dealer in a casino in the Mid-West.