Fewer things are more exciting for a CCG player than discovering that a card which was widely perceived to be bad has actual potential. However, there are some cards that seem so irredeemably bad that they practically become memes. In this article, we'll analyze one of one of those cards: Orb of Vaermina. 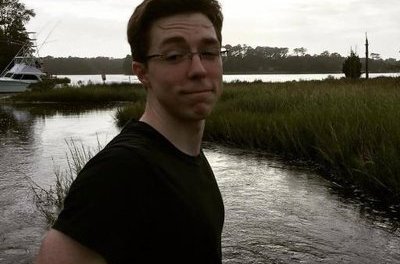 Orb of Vaermina, for a long time, has been known as “the card I chose Tyr over in the story mode” by the majority of players. To be fair, I was in that camp as well. Though in the back of my mind I always wanted to test it, it took a particularly greedy Control Spellsword list by CoreyMilhouse (and a period of pretty liberal Soul Gem spending) to convince me to give it a real shot. For reference, I will be including that list, in Deck Tech form, below. 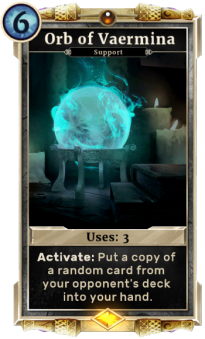 The main reason I think Orb of Vaermina has managed to fly under the radar for so long is probably due to the aggressive tendencies of the metagame. It only takes one look at the Orb to know that it is one hundred percent a control card.

At a moderately hefty cost of six Magicka, Orb doesn’t immediately affect the board at all. This is a trait it shares with a number of other supports such as Mundus Stone, but unlike them, the Orb never affects the board. It gives you an additional card in your hand that turn, and if it survives for two more turns, you’ll get two more cards. That’s the whole story.

Clearly, using six Magicka to do nothing proactive on the board is not a good plan against an aggressive deck. However, much as Healing Potion was never run to be good against Control decks, Orb should never be included as a tool to counter Aggro. Thinking of it in that way truly would make the card seem terrible. On the other hand, we have to judge it by the card advantage it can provide, for that is where the value of the card comes through. Orb is going to give you, assuming it survives the full three turns, three cards, for a net gain of two.

Though that seems quite obvious, it really makes you think about the impact a +2 in card advantage can have in a Control vs. Control matchup. These matchups are usually decided by a back-and-forth war of attrition where every single advantage gained matters. Both players are trying to get as far ahead on cards as possible, assuming one player doesn’t start trying to burst the other down. As that is a relative rarity, the time and extra Magicka to play Orb is usually present.

It’s also worth noting that while the card is costly, it isn’t always without immediate impact. On curve, you’re not going to be able to play anything you copy right away unless you happen to steal a zero-Magicka card. Later in the game, though, Orb can be a great topdeck since you’re likely to have six free Magicka even after playing the card in a lot of matchups. In those cases, it can start impacting things right off the bat and continue providing value in the coming turns.

Another reason the card is looked over and immediately discarded by most players is the variance. Obviously, in a card game with a randomized deck such as TES: Legends, any effect that allows you to draw cards is unpredictable in so much as the top card of your deck is unpredictable (well, most of the time). However, Orb suffers – and possibly benefits – from additional layers of variance.

Instead of drawing from your own deck, Orb of Vaermina allows you to draw a random copy of a card in your opponent’s deck once per turn. This means, first off, that the value of the Orb is very much determined by your matchup, and not just because the card is slow and there is more time to play it against other slow decks. Typically, slower Midrange, Control, or Ramp decks are going to offer much higher card quality than an Aggro or very fast Midrange deck. That’s not to say you can never get anything you might want from an Orb steal against those decks, but on the whole, those cards will have much lower Magicka costs and much lower power levels compared to the things you would want to be playing later in the game once Orb is giving you cards.

This also means that against Control, the card really shines. Consider a Ramp Scout mirror match where one player teched in an Orb; assuming it doesn’t get destroyed by a Shadowfen Priest, the only Support removal most of those decks play, it’s likely to fish for cards of much higher quality. It’s not uncommon that half the deck is made up of cards that have an impact in the late game, and getting a free Blood Magic Lord, Hist Grove, Mantikora, or even an extra utility option like a Silence or piece of removal can be huge – and you get three attempts. If I get a fourth Hist Grove, a Shadowfen Priest, and an almost completely useless two-cost card in the mirror match, I’m going to call that one definitely worth it, and some are much more insane. 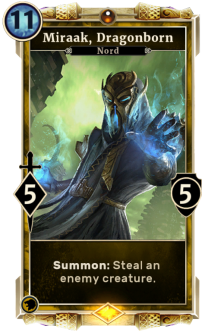 Even if you have an underwhelming three hits with Orb, the variance of the card also means it becomes nearly impossible for your opponent to play around things you may have. This can be incredibly frustrating in a control mirror where each player is counting the number of removal options left in the other’s decks and spacing out threats accordingly. Besides getting something obviously backbreaking like an extra Blood Magic Lord, sometimes you just can’t play around the fourth Silence or Piercing Javelin. This can force your opponent to make awkward plays. Sometimes you will blow them out by stealing one of their power cards, and other times, even a lower cost utility card like Execute can be just the surprise you needed to turn a game around. Not only will your opponent have to play around what they think is in your deck, but cards unique to their own deck become potential a threat as well.

We’ve already concluded that Orb is almost exclusively a Control card, but does that mean every Control deck wants to play it all the time? Absolutely not. Like just about any tech card, it completely depends on the meta and what matchups your deck is aiming to beat.

For example, the Spellsword Control list I’ve linked is designed to primarily prey on other decks that take the game long, and Orb really drives those matchups home. As there are a lot of Ramp Scouts at the moment and a few Mages and other Spellswords, it finds value in a decent amount of games, but in a hyper aggressive meta or using a Control deck that is particularly weak to Aggro, the slot is probably better used for something more effective in those matchups.

It’s also worth thinking about the amount of Support removal available at any given point. Shadowfen Priest is a threat to the card but forcing them to use a Silence to remove an Orb that already drew something isn’t always the worst. If more Support removal makes its way into the meta, though, it might impact the playability of the Orb since it really needs to get as many draws as possible to be worth it.

Hopefully this article gave you some things to think about, and even if this doesn’t quite convince you to use the Soul Gems to craft Orb of Vaermina immediately to test out, it will at least serve to show that even the most under-appreciated effects can find success at the right time.