Welcome to the first part of Warlock Analytics, an in-depth analysis of The Elder Scrolls: Legends and its community! My name is Charles, or as some of you might already know me, ArkhamWarlock. Today, I will be illustrating key findings from the TES:L Community Survey that was distributed early last week and discussing their implications. First, however, I would like to give a shoutout to /u/AntonValerian as the winner of the accompanying raffle to the Community Survey! We hope you get some sweet premium mudcrabs from your $20 gift code.

Before diving into the results, I would like to issue two disclaimers, both of which are very important in understanding how to digest these results (and maintaining my credibility as a statistician!)

With that out of the way, let’s get to the juicy results!

The first item asked on the survey had players describe their level of experience in TES:L in terms of months playing the game. A large proportion – 45.5% to be exact – reported being new or relatively new to the game (0-1 months or 2-3 months), which is unsurprising given the recent release of TES:L on all mobile platforms and the Heroes of Skyrim expansion. You can see this visually represented in Figure 1 below.

Figure 1. Experience with TES:L in Months

The next graph then begins to tell us an interesting story about our players if you consider the data in conjunction with Figure 1. Almost 30% of respondents on the survey have hit Legend rank at some point in their TES:L career, which you can see illustrated in Figure 2 below. My first instinct was to look at those 190 players and then reevaluate the experience graph again. Much to my surprise and delight, the curves were almost identical. Loosely interpreted, experience as defined by the survey did not seem to have an impact on one’s capacity to achieve Legend, which is probably a breath of fresh air for prospective players feeling intimidated by joining a new competitive scene. Supplementary analyses supported this claim.

Next, Figure 3 illustrates what color combination players tend to enjoy playing the most. There is a noticeable bump in Mage players, which is reflected somewhat in the next graph. Figure 4 instead looks at the color combinations players use the most, which can be different from favorite color combination for a multitude of reasons. Perhaps one player had a great deal of success with midrange sorcerer and stuck with it; in another case, a player may have found themselves overwhelmed by aggro decks and chose to adopt control mage for laddering purposes. In the interests of not bogging respondents down with too many questions on the Community Survey, reasons for these selections were not asked, but they may be looked at in future surveys.

I conducted some statistical tests such as Cohen’s Kappa (somewhere, a Twitch viewer just sneezed) to see how much alignment there was between favorite color combinations and most used combinations. While the results were promising, going into them here would take up far too much space. Suffice to say, there was enough agreement to convince me that players only used decks they felt were meta viable, but not enough agreement that everyone exclusively played their favorites. For visual representations, Figure 3 and Figure 4 are below. 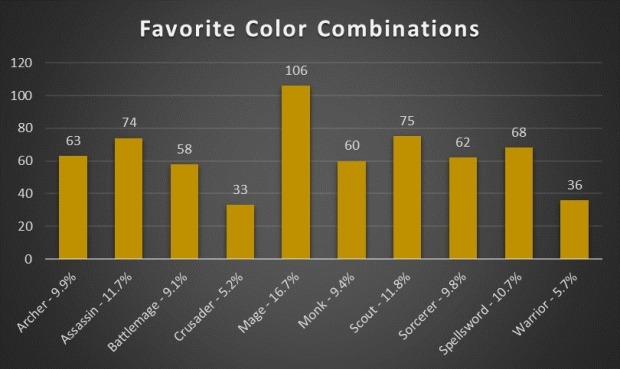 This next item addressed in Figure 5 asked players to report the ease or difficulty of gaining ranks on the ladder. There’s a gentle lean towards difficulty, but the curve itself is normal in statistical terms (for the statisticians out there, skewness = -.585 and kurtosis = -.096. Hot, isn’t it?). Loosely interpreted, players in the survey mostly felt that the experience was somewhat difficult, but not overly so. Out of curiosity, I also examined this curve with the players who reported only playing for 0-3 months (275 players), and it looks almost identical. Again, experience over time seems to be having little impact on these items. We’ll see if that trend continues! 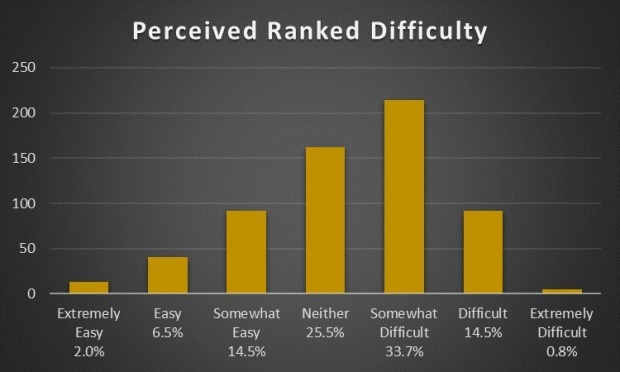 Of the 635 respondents in the survey, only 6.1% (38 players) reported not playing ranked. Where were they, you ask? Almost all of them fell into the 0-1 month or 2-3 months category. This makes sense when evaluating the comments from the follow-up item asking for their reasons for not playing ranked. Many players who commented expressed that they wanted to grow a collection first and that they did not feel confident jumping straight into the ladder. Other respondents, including those outside of those experience categories, referenced the “grind” of the ladder and stayed away from it to avoid what they felt was a tedious experience with low-impact rewards. To reiterate, however, these opinions represented a very small minority of the total responses.

In the interests of touching on all aspects of TES:L, the Community Survey also included a few items about Arena in its various formats. While these items were limited in scope, I hope to distribute another survey in the future exclusively focused on Arena. That’s for tomorrow, though – let’s have a look at what players are saying right now.

When asked for a preference between Versus Arena or Solo Arena, 53.1% (336 players) preferred Versus Arena, and 46.9% (297 players) preferred Solo Arena. Had I collected survey data prior to the launch of Heroes of Skyrim, it would have been an interesting point of comparison to look at Solo Arena preference before and after the expansion. I say this not only from my own experience in the difficulty of Solo Arena rising, but also based on many comments given at the end of the Arena section on the Community Survey. Comments repeatedly lamented the spike in difficulty, particularly when approaching Rank 2 and Rank 1 of Solo Arena.

Here’s another fun bit of information. When asked if they had ever played in a Chaos Arena before, the monthly event where Daedric Prince Sheogorath takes over Versus Arena and introduces random conditions such as the infamous Zoo lane and deck swapping, 60.2% (383 players) said, “Yes,” and 39.8% (253 players) said, “No.” To provide a clearer picture on the topic, 116 of those 253 players that answered “No” fell into the 0-1 Month experience category, which means they likely haven’t had the chance yet to participate.

Lastly, here are two additional figures based on items asking players about their highest rank ever achieved in Versus Arena (615 responses) and Solo Arena (628 responses), respectively.

Here we see a slight favor for blue at 31.3% followed closely by green at 25.2%. It continues to gently wind down until we get to gray. Poor gray. Nonetheless, blue is the clear winner, likely due to some fun inclusions in the color (and maybe not-so-fun, as you’ll see when we get to favorite and least favorite cards). When asked to provide a reason behind their choices for favorite colors, players favoring blue described the color as versatile and containing a great deal of card variety. Access to some control options also featured as another major reason. Players who chose green as their favorite spoke mostly about the color’s capacity for tempo plays and flavor of Curse effects. Green also saw many shout-outs to Khajiit cards, so watch your coin purses!

Comments regarding purple often included mentions of massive creatures, ramp effects, and access to plenty of cards with the Lethal keyword. Yellow players seem to greatly enjoy their removal as well as the capacity to create tokens. For red players, access to so many charge creatures was the most appealing, as well as the fact that it is “the color of orcs,” to quote one respondent; truly, a player after my own heart. Lastly, gray comments mentioned Dwemers and the access to many unique cards despite the color’s low power as a whole.

Of course, now we must look at what players feel is the strongest color. Oh boy. 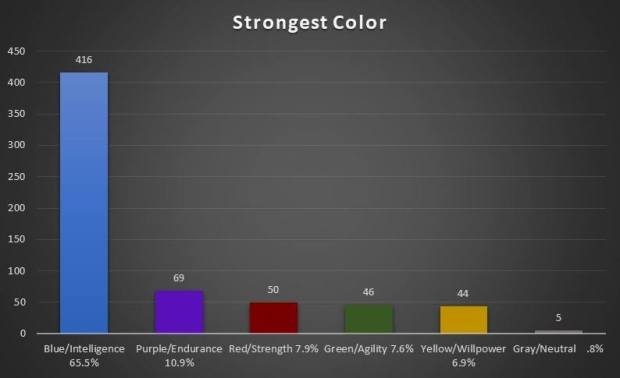 Azura, give me strength, that’s a lot of blue! In a 65.5% landslide, blue completely overwhelms the other colors in terms of perceived power. Of course, this shouldn’t come as a surprise once we start to look at what players revealed were their top picks for most and least favorite cards.

The reasons as to why players chose the colors they did here mirror the reasons they listed for their favorite color choice: blue has high versatility, purple has large creatures, green has tempo, etc. One additional theme worth mentioning is the highly prevalent notion among the responses that blue has the most powerful cards in the game. Whether that’s true is certainly up for debate – no, seriously, just go to Reddit – but the players have spoken. Speaking of powerful cards, that brings us to favorites and least favorites.

Does it smell like late game in here to anyone else? Taking the #1 spot for most selected out of the entire card collection is the Thalmor mage of Skyrime fame, Ancano. Apparently, nothing says happiness like 5 direct points of damage and the silly possibility of lethal with Ice Storm. The dragon presence on this list is also something to consider: Paarthurnax, Alduin, Odahviing, Shearpoint Dragon, and Undying Dragon all feature here and take up half the list. One has to wonder if this is due to the recency of Heroes of Skyrim; future surveys will surely feature this item, and we can compare then. Now, for the least favorites… 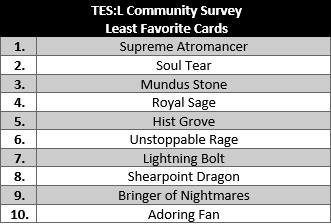 To no one’s great surprise, Supreme Atromancer takes the #1 spot for least favorite card in TES:L. Not only was Supreme Atromancer selected the most times in an open-ended question, but she was entered in 64 times! Soul Tear, a staple for most decks running purple, was selected only 21 times in comparison. Speaking of Ramp Scout, Hist Grove makes a solid appearance at #5, right behind Royal Sage (though, if we’re being fair, we’re behind on most things when Royal Sage enters the field).

That about wraps it up for this snapshot. While there are dozens of permutations I could run to analyze the different sentiments of different players across different experience levels and ranked achievements, it’s important to remember that this is just a slice of time in TES:L’s lifespan. Much like the metagame, some things that may be true (or our best approximation of the truth) today may not hold up tomorrow. Furthermore, my goal for this survey was simply to gauge interest in analytics like this with some simple descriptive statistics. Now that I know the appeal is there, I’m looking forward to distributing another Community Survey in the future and continuing to provide the players a deeper, data-driven look at our favorite card game. Thanks for reading, and I’ll see you all somewhere between the lanes!

When I'm not conducting research at Claremont Graduate University, you can catch me on Twitter as @Arkham_Warlock making quips about surveys for The Elder Scrolls: Legends or find me in game puzzling over what removal to use. I also write and edit surveys about TES:L, which you can find at BetweenTheLanes.net.

5 Comments on Warlock Analytics, Part 1: A Data-Driven Snapshot of the TES: Legends Community