Hi guys, Pdmd28 here with a guide for one of my favorite decks: Orc Warrior. In this guide I will go in depth about card choices and possible tech cards, what the deck tries to accomplish, mulligans, and its matchups.

Lets start with the core. I wanted to take advantage of the powerful effect of Bangkorai Butcher and to do that frequently I picked all the other good Orcs to help him trigger. Cards like Orc Clan Captain/Shaman and Dragontail Savior for the early game, Gatekeeper and Graystone Ravager for a chance of prophecy and extra damage, Battlerage Orc and Wood Orc Headhunter for burst, Militant Chieftain/ Garnag to use against control and refill with Chieftain, Dushnikh-Yal Archer for pings (either to set up better trades or face damage or using his ability to remove a support), and for the last Orc, Stoneshard Orc. Stoneshard is one of the most important ones and can be used as great removal or even damage if you can use it with Orc Clan Shaman and give it Breakthrough.

After the core was built I wanted Sower of Revenge because of his amazing effect and stats. He’s one of the ways this deck has to beat Control decks and protect your creatures while still putting pressure on the board.

Then since I had a heavy red based deck I went for Mighty Ally to help pressuring in the early game. To help me continue pressuring in the mid game I chose Reive, Bladmaster. This card can get out of control if people can’t deal with it and even if a guard is in his way you still get his effect to push some damage. Speaking of guards, Earthbone Spinner is there to help you take them away so you can push all your damage. Spinner’s effect is really versatile for this deck and silence is a really strong effect that helps you by taking away creature buffs to help you race, removing guard so you can go face, or silencing your own creatures if shackled.

We still have two cards to talk about: Underworld Vigilante and Belligerent Giant. Vigilante is other way of getting burst in this deck. It’s a really good charge creature with a good effect as well that helps you trade in the shadow lane in times of need, but her main target is, of course, your opponent’s HP. Belligerent Giant is just another way to help you remove cards from your opponent’s side of the board, giving you back the tempo and at the same time giving you a really powerful creature that can add a ton of damage.

Now some cards to tech depending of what you see in ladder:

Withered Hand Cultist – Can help you against control decks delaying their removal
Rapid Shot – If you see Midrange Sorcerer coming back, this card allows you to break their creatures’ Ward and draws you a card
Savage Ogre – Like Belligerent Giant, this card can present a real threat in the late game in his own way
Young Mammoth and Wind Keep Spellsword – If you don’t want to take the red approach you can use these two cards that will help your early game while still being really good at applying pressure
Wrath of Sithis – Another way to counter Control decks

Orc Warrior is an aggressive Midrange deck that takes advantage of Orc synergy to get ahead on board with big plays on curve like Bangkorai Butcher and Wood Orc Headhunter or big tempo gains with the help of Stoneshard Orc. 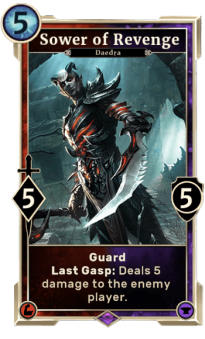 The deck tries to put pressure on the board from the start and kill your opponent fairly quick between turns 6-9 normally. However, it can slow down and take its time in some matchups and even control a bit depending on your hand, setting up two-turn kills. Controlling until you can start to build up a strong board is possible with this deck.

Cards like Sower and Garnag help you against control and if you can play around their big removal turns like Ice Storm or Dawn’s Wrath you can win that matchup. Against aggro you want to take it slow. Depending on what aggro deck I’m facing I usually try to “control” the best I can and at the same time trying to set up a one/two turn kill. Against midrange you want to curve the best you can while pressuring them and making them taking the role of the defensive player.

Mulligans are one of the hardest things in card games and bad mulligans can cost you games. After playing an insane amount of games with this deck against pretty much every deck type, here are my tips for mulligans.

If you can guess what you are playing against, you can adapt your mulligans. For example, if you know you are playing against Token Mage, you keep cards that will help you deal with their early game like Sharpshooter Scout if you’re teching it/Orc Clan Shaman/Mighty Ally, and if you have two other cheap Orcs, you can keep Stoneshard. this are the cards you try to keep/get going 1st, but if you have the ring you can change to try to pressure instead and keep Shaman/Ally/Butcher/Reive etc

Finally, here is some insight from all my games on how you do against a variety of decks as Orc Warrior. I will use my experience from my recorded games.