There are a lot of interesting cards in Legends that just barely miss the cut when building a competitive deck – and while there are certainly enough cards out there that do amazing things that it’s possible to build a variety of exciting decks, sometimes it can be fun to imagine slightly different versions of existing cards that could change their playability. A great historical example of this happening is Morkul Gatekeeper, who didn’t always have prophecy – everything else about the card was the same, but the guy saw absolutely no play until the prophecy addition, and now he’s a staple. My first change harkens back to this.

This is less of an outright buff than it is a rebalancing of stats, but I think it makes Blood Sorceress a much more compelling card. Blood Sorceress is never a card that you want to play in the early game – in a world full of Curses, Murkwater Witches, Firebolts, and Executes, you’d likely get more value from a Crown Quartermaster. Having 2 attack is never why you run this card. The primary function of this card has always been as a closer, usually in conjunction with Wispmother. By adding prophecy, however, we add an element of tension to matches against decks running Blood Sorceress that I think would make for more compelling gameplay.

Against control decks, midrange decks often chip damage against their opponents piecemeal, as they get an opportunity to do so. Hitting a prophecied Blood Sorceress in the mid- to late-game adds some spice to the match. Additionally, it makes the card a unique prophecy to play around, in that in the early game, it means virtually nothing, but as the game goes deeper, it becomes much more interesting.

A straightforward change, I’ve always been of the opinion that this card is almost playable as it is. Right now, it’s one of the least interesting Legendary cards in the game, and I think that by slightly nudging up its power level, we would have a card that is much stronger in midrange vs midrange matchups, opening the possibility of play in more decks.

As it stands, dying to Firebolt and a host of 1-cost creatures in combat means you’re almost never triggering this card once, much less twice, and I don’t think that (outside of some combo decks, which I would argue could use the boost) its power level as a 2/4 that discounts rune-broken cards would be anything beyond Brotherhood Slayer, who right now is always a better 3 drop choice. Trading prophecy for potentially more consistent discounting is still a rough trade, but the change to a 2/4 makes it more clearly a combo, slower midrange, or control card, which would give it a home.

Angry Grahl is another card that I’ve tooled around with a bit, and though this change is much more drastic than the other two I’ve written about so far, I think that its still an appropriate amount of complexity for an epic rarity card.

A 4/6 regenerator for 4 is certainly nothing to scoff at, but in my experiences with the card, triggering it is so incredibly challenging at times that I believe even with the addition of a discard trigger on summon, it’s nowhere near a guaranteed effect. What I like about this change is the synergy it creates with archetypes that could use a bit of support, and the addition of the last gasp effect makes it a better top deck in the middle to later stages of the game in matches where decks are operating at an even pace. As with the other changes, this wouldn’t make the card oppressively powerful or common, but would add a new element to deck building design. It would also be an interesting addition to a Necrom Scout build, a deck that needs a few more cards to be worth taking onto the ladder. 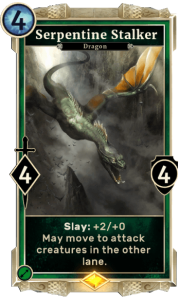 Another legendary creature without a home, I think that adding the ability for the Stalker to trigger on face hits would notch this card up to a competitive power level, beyond the niche cards that the previous buffs I’ve suggested would create. And why not? At the 4-cost level, so many cards are outclassed by Cloudrest Illusionist, Mystic Dragon & Lightning Bolt (not to mention Murkwater Shaman & Earthbone Spinner) that it takes a lot of power to compete with cards you get to play for free from time to time.

This change just increases the aggressive potential of the card, but to a degree that I think wouldn’t unbalance the game, just add new avenues and options. I think that encouraging people to choose cards without prophecy over similar cards with prophecy is something the game should consider doing more of, and this change would make it an actual choice, I believe, as to which cards you run at this cost. 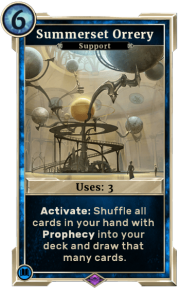 With Orrery, I feel like the idea for the card is incredibly strong. This card made a degree of sense back in the earlier days of the game, when prophecies were viewed as much more defensive options for decks and were played at a considerably lower rate. This change doesn’t make a competitive card out of Orrery necessarily, but what it does is enable a player to build a very specific type of deck in which Orrery will be a potential powerhouse.

I think that the ability to put cards on top of our decks is an inevitable evolution of the Legends mechanics, and a change to Orrery is a good place to let players try that out. This is a power level buff of a degree I didn’t suggest for other cards, but since we’re starting at essentially 0/10 I don’t think it’s unreasonable. This change is for Johnny – it’s pushing a card that creates an archetype for people looking to do goofball things.

I'm an average guy who likes to play Elder Scrolls Legends. Being friendly and helpful is important. www.youtube.com/c/TheJustinLarson for Legends content.