It has been approximately a month since the latest story expansion Return to Clockwork City (RTCC) for The Elder Scrolls: Legends (TESL) has been released. It added 58 new collectible cards to the game and players are adding them to existing decks and building new ones around them. Recently Reirei Barker presented some of his new decks with cards from RTCC in another article here on betweenthelanes.net. When I discussed the new cards with him and other players we agreed on the power level of some cards, but had very different opinions about other cards. Overall, I found this set hard to evaluate. That is the reason why I decided to collect as many opinions as possible via a survey. I published the link to the survey on Reddit, in several TESL related Discord channels and some streamers posted the link in Twitch chat. The survey was open from December 18 until December 23. When the survey was closed, it had 213 participants. The participants went through every single card from RTCC and evaluated its power level for constructed play on a scale from 1 to 10 with 1 being one of the worst and 10 being one of the best cards in the game. There were a few people who submitted their votes several times and some others who rated almost every card with a value of 1 and only a few others with very high values. To prevent these votes from distorting the results, I removed the duplicate votes and the votes from participants who rated more than 50% of the cards with a value of 1. After that 199 votes remained. I would like to thank all 199 participants who took the time to rate all 58 new cards.

The most expressive indicator for the cards’ power level which can be derived from this survey is probably the empirical mean. Without further ado here is a list with all cards sorted by the mean. The third column also shows the empirical variance, which can be interpreted as an indicator for how much the participants agree on this power level. Lower values for the variance indicate that most votes are close to the mean value. 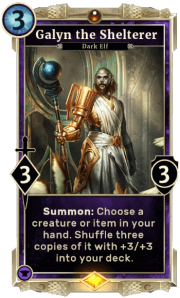 Galyn the Shelterer is at the top of the table by a wide margin. The difference in the mean value of Galyn and the card with the second highest mean (Laaneth) is larger than the difference between any other pair of neighbored cards in this list. The participants obviously agree that he is the most powerful card from the expansion. He has the second smallest variance, which indicates that most participants agree on his high power level and rated him with values that are similar to the mean. The vote distribution for Galyn is shown in the following histogram. Only 16 people rated him with a value lower than 7, while 143 people gave him a rating higher than 7.

Histograms for all cards can be found here.

One of the reasons why Galyn got such a high rating by most participants is his flexibility. If you are facing an aggressive deck, you can shuffle some huge creatures with Guard, Drain or Prophecy into your deck. Against a control deck he can be used to put some extra copies of your more expensive resource-extending cards into your deck. Galyn is played in many purple decks since the release of RTCC, for instance in Control Scout. Some of his main targets in this deck are Giant Bat and Paarthurnax.

The card with the second highest mean value is Laaneth. She offers the new and unique ability to search for a specific card in your deck and put it into your hand. In combo decks like Item Sorcerer or Wispraider OTK she is used to find your key cards like Relentless Raider or Master of Arms. Laaneth can also be played in control decks or slower midrange decks. Depending on the matchup and the board state, Laaneth can be used to find either a defensive card (e.g. Drain Vitality in Assassin decks) or a proactive threat to deal the last points of damage to your opponent (like Ancano).

In third and fourth place we have Phalanx Exemplar and Barrow Stalker. These are cards with solid stats and relevant keywords. Both cards are good tools, when you need to defend yourself and when you want to go aggressive. Barrow Stalker also helps you triggering the effect of cards that care about being ahead on life (e.g. Royal Sage, Golden Saint or Triumphant Jarl).

With Assembled Titan, Clockwork Dragon and Reflective Automaton there are more very flexible cards within the top 10 of the list. Hallowed Deathpriest, Sails-Through-Storms and Clockwork Apostle complete the top 10.

The card with the lowest average rating is Daring Heist. It is very hard to get value from this card. This card does not seem to fit in most control decks, since they usually do not want to go face early and potentially give the opponent a card by breaking a rune. More aggressive decks do not have 3 spare magicka most of the time. Furthermore, there are a lot of ways for control decks to prevent card draw with Daring Heist. They either remove all your creatures in one lane or put guards in their way. In combination with charge creatures like Nord Firebrand it might be easier to draw cards with Daring Heist, however there are more reliable options for card draw in these decks (e.g. Triumphant Jarl or Crusader’s Assault). Daring Heist has the third lowest variance, which indicates that most participants agree on its low power level. 91 participants rated it with a value of 1.

Dormant Centurion got very low ratings as well. While 3/5 is not a bad stat line for a 3-cost creature, the player needs to meet the condition of playing an action every single turn to be able attack with this creature. Like Daring Heist this card is overshadowed by other options. For instance, Cliffside Lookout offers similar stats, can attack without fulfilling a condition every turn and has the potential to grow even larger. Dormant Centurion is the card with the lowest variance. Most participants rated it with a value from 1 to 3.

Overall, the cards with the lowest ratings have conditions, which are hard to fulfill, do not provide a lot of value and are overshadowed by other cards. For example, Star-Sung Bard is overshadowed by Hist Speaker.

The cards with the highest variance are Skeevaton, Dwarven Colossus and The Mechanical Heart. While Skeevaton got a rather low rating from most participants and very high rating from a few other participants, the ratings of Dwarven Colossus and The Mechanical Heart are spread more evenly among the whole range. It will be interesting to see whether these cards turn out to be viable in competitive decks.

There are several ways to divide the cards from RTCC into several categories and to find groups of cards, which belong together. One way to divide all cards into 4 categories is by only looking at their rarity. Intuitively one would expect that a higher rarity corresponds to a higher power level. However, as can be seen in the following diagram, only the average power level of legendary cards is higher than the average power level of common cards. Common, rare and epic cards have a very similar average power level (between 4.6 and 4.9), while legendary cards really stand out with an average of approximately 6.8.

Another way to divide all cards into subcategories is by grouping them based on their attribute. Before RTCC came out, ArkhamWarlock reported here on betweenthelanes.net that Strength was considered to be the most powerful attribute (followed by Intelligence), while Neutral was perceived as the weakest attribute. Looking at the average power level of RTCC cards for each attribute Endurance is leading with an average of 5.58, while Strength cards were rated the lowest on average (4.58). It is noticeable that 3 of the top 5 cards with the highest mean value are purple, while the most powerful Strength card is at rank 12.

All cards can also be grouped by their type. Most (45) of the new cards are Creatures. RTCC also introduced 7 new Actions, 3 new Items and 3 Supports. On average the items got the highest rating with 5.66, while the new supports were rather underwhelming with an average rating of 3.65.

Some Fabricants provide a bonus, if you have a neutral card in play. This can be seen as a new mechanic as well. There is one of these cards with each attribute except for neutral. With an average power level of 5.24 most of these cards do not seem to be worth building a deck around them. The only exception might be Hulking Fabricant, which got an average rating of 6.29. 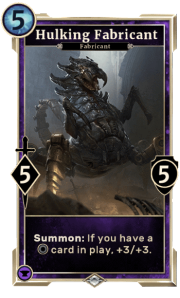 Once again thanks to everyone who participated in the survey. Thanks as well for the feedback that some of you added in the comment section of the survey, on Reddit or shared with me directly. Some participants wanted to see a similar survey for the power level of the new cards in arena. I would like to point out CVH’s Arena Tier List to those people. I really enjoyed analyzing the votes and discussing the new cards. Some results were similar to what I expected, and some others surprised me quite a bit. For example, I was expecting Ruthless Freebooter and Reverberating Strike to be rated higher. Analyzing the data from this survey influenced my opinion on some of the new cards and I hope it will help some of you as well when you are trying to build new decks with cards from RTCC. I hope to see you all on ladder!

I would like surveys like this to become a monthly series. To prevent several responses by the same person and allow participants to edit their votes, respondents will be required to sign in to Google for the next survey. However, your votes will be anonymous and I will not collect personal information like email addresses. Here is the link to the new survey. It is about the cards from the other story expansion Fall of the Dark Brotherhood. The survey will be open longer this time (until January 31), so hopefully nobody who wants to participate will miss it. Please use the following descriptions and examples for each power level as guideline for completing the survey.