Do you want to play something in the Scout class other than the traditional Ramp or Midrange lists? Well, in these videos I'll be showing you a new twist on the more aggressive Scout lists with an underused race: Goblins! 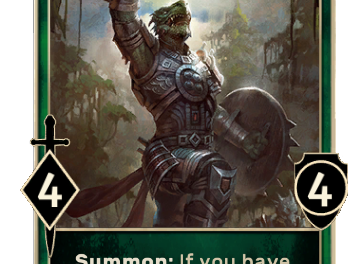 The original list (which was three cards off of the list I feature in the following videos) was given to me by Harrison5371, so the bulk of the credit definitely has to go to him. As someone who has played his fair share of Ramp and Midrange Scout decks, I can safely say that Goblins have been a refreshing change of pace.

On the surface, this deck might just look like it wins games for the reasons a traditional Midrange Scout deck wins games – it curves out and plays Soulrest Marshal and Black Worm Necromancer. While that is indeed true, one of the most startling aspects of the deck is that the Goblin package is actually effective. While the deck can suffer from some awkward late-game draws as I mention in the Deck Tech, it benefits from a much lower curve. This curve is filled with cards that have a high threat level, since Goblin Skulk can generate free value and Murkwater Skirmisher can turn any average Goblin into a beat-stick as soon as you get to four Magicka.

In the first video, you can see a more detailed rundown of every single card choice in the deck. The second features some gameplay of the deck on the legend ladder to prove the deck is up to the task!