In this video, CoreyMilhouse brings us a deck tech on one of his favorite decks recently: Wrothgar Forge Archer! Watch the video to hear him break down the general strategy, [...]

In this video, I’ll be going over my Tempo Assassin deck that I used recently in the post-Fall of the Dark Brotherhood metagame – a powerful deck if you’re [...]

In this video, CVH goes over a Sorcerer deck with a unique twist featuring cards from the Fall of the Dark Brotherhood expansion to take advantage of a stacked discard pile! [...]

Control Monk is one of the decks I was most excited to test out after Fall of the Dark Brotherhood, and a lot of that is because of Eclipse Baroness. While slow, the Baroness [...]

In this video, CVH goes over the Orc Warrior deck he used to hit top five Legend near the end of the March season. The deck went 16-2 on the climb against a variety of [...]

Howdy everyone! My name is Chris, or as you may know me, Lateralus19. I have been playing TES: Legends since the end of July and have been able to achieve Legend rank each [...] 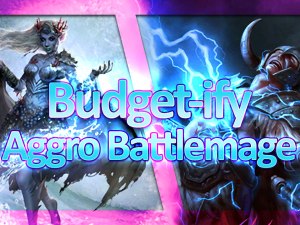 In the Budget-ify series, I’ll be taking decks that are popular on the ladder and usually quite expensive in their optimized forms, and reducing their cost [...]

In today’s video, CVH goes over his version of the Midrange Mimic Scout deck along with the general gameplay elements of the deck. Illusory Mimic’s introduction [...]

In this video, CVH goes over a Wrothgar Forge Crusader he’s used on the ladder [...]

Do you want to play something in the Scout class other than the traditional Ramp or Midrange lists? Well, in these videos I’ll be showing you a new twist on the more [...]